We already learned how to execute a block of commands more than once using a for loop. In the previous chapter, we reviewed some loop structures that would help us solve more complex problems like:

Write a program that enters two integers n and l and generates in alphabetical order all possible "dumb" passwords that consist of the following 5 characters:

Print on the console all "dumb" passwords in alphabetical order, separated by space.

We can split the solution of the problem into 3 parts:

One of the ways to find a solution for this problem is to create five for nested loops, one for each variable. To ensure that the last digit is greater than the first two, we will use the built-in method Math.max(…): 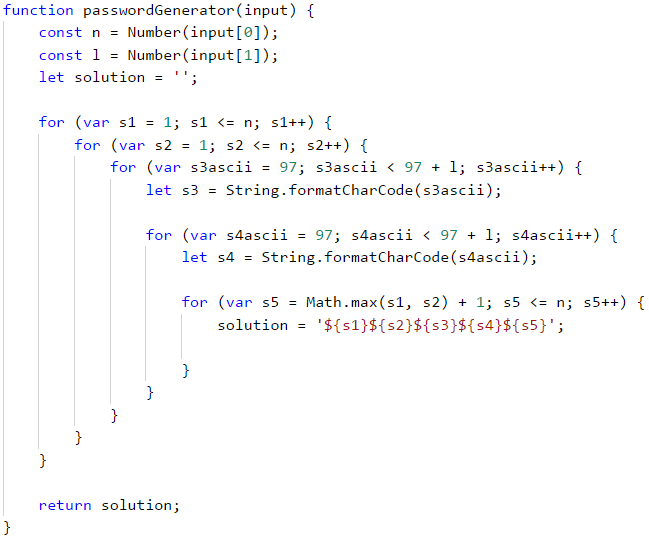 Write a program that enters a single integer magic number and produces all possible 6-digit numbers for which the product of their digits is equal to the magical number.

Print on the console all magic numbers, separated by space.

The solution of this problem follows the same conception (we have to generate all n combinations of the element). Follow the steps and try to solve the problem on your own: 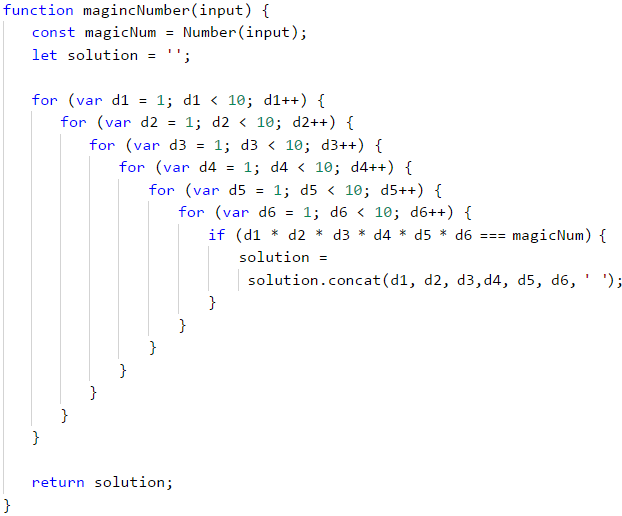 In the previous chapter, we reviewed other loop constructions. Let's look at the sample solution of the same problem using the while loop. First, we need to store the input magical number in a suitable variable. Then we will initialize 6 variables – one for each of the six digits of the searched numbers. 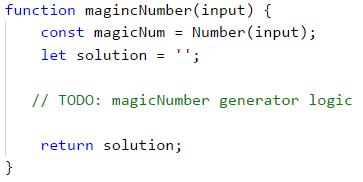 Then we will start writing while loops. 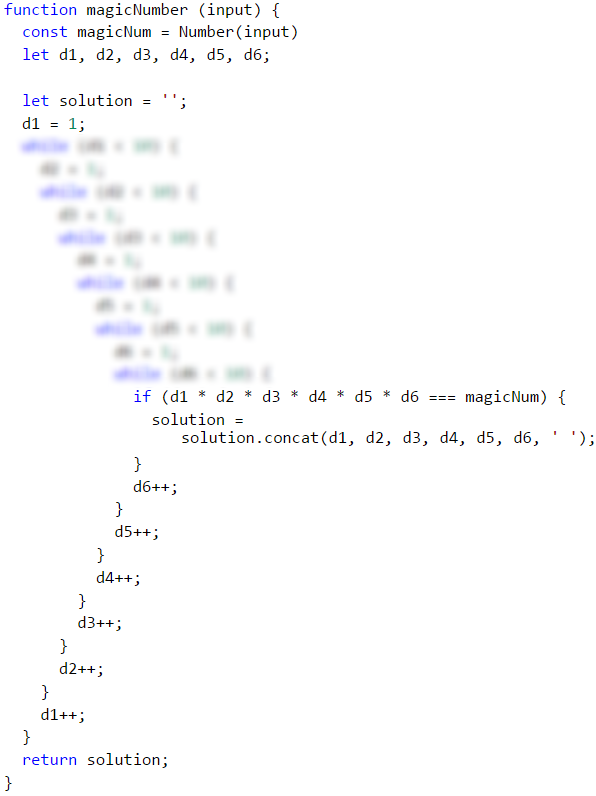 As we can see, we can solve a problem using different types of loops. Of course, each task has its most appropriate choice. To practice each type of loop – try to solve each of the following problems with all the learned loops.

Write a program that prints on the console all numbers from N to M, that are divisible by 2 and 3 without remainder, in reversed order. We will read one more "stop" number from the console – S. If any of the numbers divisible by 2 and 3 is equal to the stop number, it should not be printed, and the program should end. Otherwise print all numbers up to N, that meet the condition.

Read from the console 3 numbers, each on a single line:

Print on the console on a single line all numbers, that meet the condition, separated by space.

The problem can be divided into four logical parts:

The First part is ordinary – we read three integer numbers from the console.

We have already seen examples of the second part – initialization of the for loop. It is a bit tricky – the explanation mentions that the numbers have to be printed in reversed order. This means that the initial value of the variable i will be bigger, and from the examples, we can see that it is M. Thus, the final value of i should be N. The fact that we will print the results in reversed order and the values of i, suggests that the step would be decreased by 1.

After we have initialized the for loop, it is time for the third part of the problem – checking the condition if the given number is divisible both by 2 and 3 without remainder. We will do this using one simple if condition that we will leave to the reader to do by themselves.

Another tricky part of this problem is that apart from the above check we need to do another one – whether the number is equal to the "stop" number entered from the console on the third line. To do this check, the previous one has to be passed. For this reason, we will add another if statement that we will nest in the previous one. If the condition is true, we need to stop the program from printing. We can do this using a break operator, and it will lead us out of the for loop.

If the condition that checks whether the number is equal with the "stop" number returns a false result, our program should continue to print. This covers the fourth and last part of our program.

Write a program that reads one integer number N and generates all possible special numbers from 1111 to 9999. To be considered special, a number must correspond to the following condition:

Print on the console all special numbers, separated by space.

Solve the problem by yourself using what you learned from the previous two problems. Keep in mind the difference between operators for integer division ( / ) and division with remainder ( % ) in JavaScript.

Write a program that reads from the console 1 integer within the range [100 … 999], and then prints it a predefined number of times – modifying it before each print, as follows:

Print on the console N lines and each line has M numbers, that are the result of the above actions.

Print on the console all integer numbers, that is the result of the above-mentioned calculations in the respective number of rows and columns as in the examples.

Solve the problem by yourself, using what you learned from the previous ones. Remember that you will need to define different variables for each digit of the input number.